Saturday 11 May | Faust – A diabolic tale

A light-hearted family performance, loosely based on famous Faust stories and with well-known works specifically composed for Faust stories by Berlioz, Gounod, Tchaikovsky and Grieg.

Street musician Faust is on his way home after wandering around… His attempts to become famous have failed. He rests at the side of the road. Disappointed in the world and especially himself, he is an easy prey for the Devil. Does Faust let himself be fooled out of his violin and with it his soul? 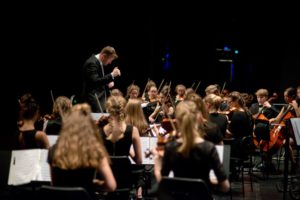 family performance, loosely based on famous Faust stories by Johann Wolfgang von Goethe, Thomas Mann and Mikhail Bulgakov, among others. The age-old story of how man sells his soul to the devil in exchange for knowledge, wealth, power or love continues to fascinate. In this cheerful performance, text, acting and live music constantly alternate and well-known works are played that were composed specifically for Faust stories by composers such as Berlioz, Gounod, Tchaikovsky and Grieg.